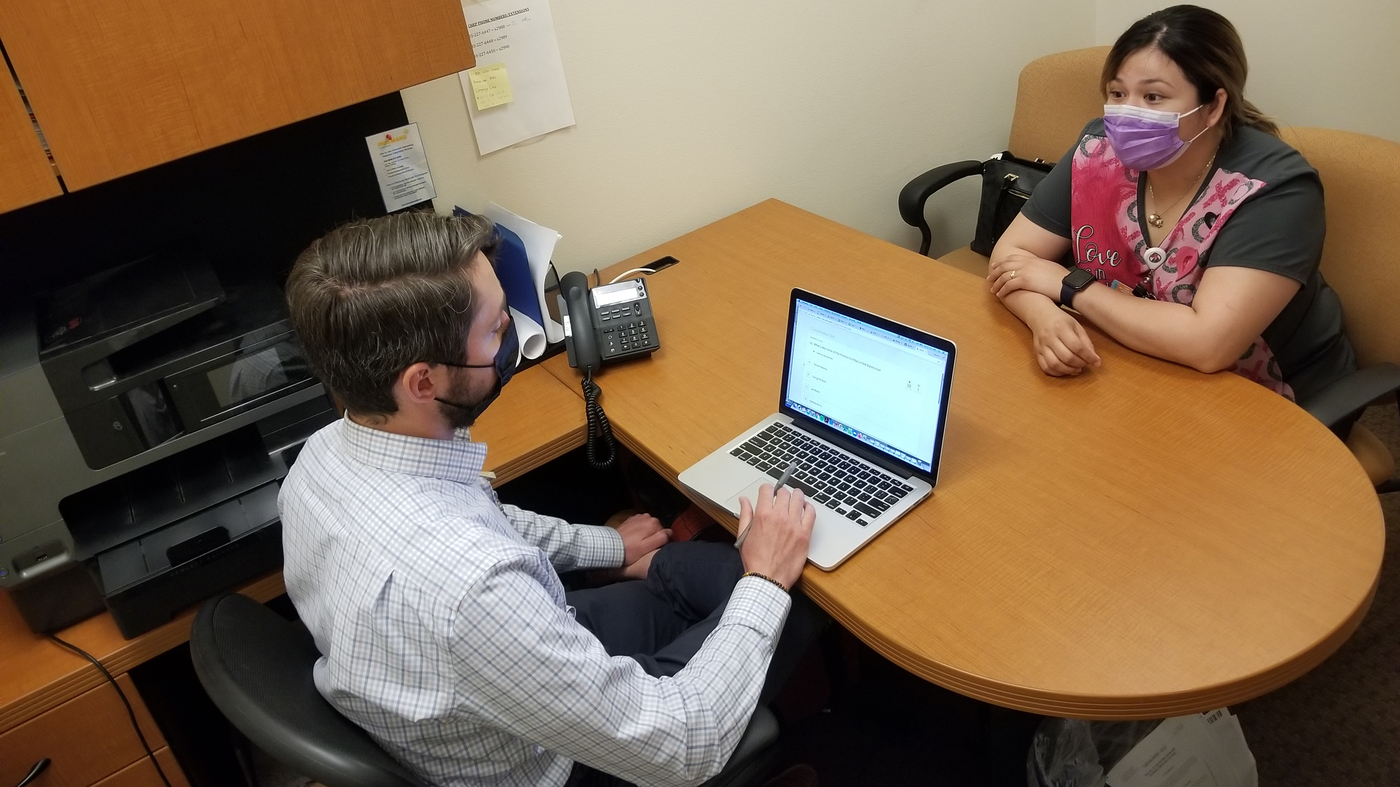 Attorney Marc Scanlon meets with client Kimberly Ledezma at Salud Family Health Centers’ clinic in Commerce City, Colo. Every day in this Denver suburb, four lawyers join the clinic’s physicians, psychiatrists and social workers to consult on cases, as part of the clinic’s philosophy that mending legal ills is as important for health as diet and exercise.

Attorney Marc Scanlon meets with client Kimberly Ledezma at Salud Family Health Centers’ clinic in Commerce City, Colo. Every day in this Denver suburb, four lawyers join the clinic’s physicians, psychiatrists and social workers to consult on cases, as part of the clinic’s philosophy that mending legal ills is as important for health as diet and exercise.

In her 19 years of living with cerebral palsy, scoliosis and other ailments, Cynthia Enriquez De Santiago has endured about 60 surgeries and her heart has flatlined at least four times.

But the most unusual doctor’s referral of her life came last year: Go see an attorney.

Enriquez De Santiago sought help at a Commerce City, Colo., health clinic that takes a novel approach to improving the health of its patients: It incorporates legal assistance into its medical practice for patients facing eviction or deportation proceedings, among other legal woes. And the state’s Medicaid program helps fund the initiative.

Although Medicaid traditionally doesn’t fund clinics to supply legal assistance, Colorado is one of several states that have been given permission to use some of their Medicaid money to help pay for such programs. Every day in Commerce City, four lawyers join the physicians, psychiatrists and social workers at Salud Family Health Centers’ clinic in this suburb north of Denver, as part of Salud’s philosophy that mending legal ills is as important for health as diet and exercise.

The goal: Reduce dangerous levels of stress and keep families intact, on the premise that it will serve their health for years to come, says Marc Scanlon, the attorney who directs the program.

Mostly, that has meant helping people with unemployment benefit claims and Social Security Disability Insurance denials. But it also regularly entails helping patients — many of whom speak only Spanish after having arrived here from Mexico or Central America — with immigration hearings.

Based in health clinics, but only rarely using Medicaid dollars

The program is among at least 450 existing medical-legal partnerships across the nation that typically serve impoverished people and migrants. The vast majority don’t rely on Medicaid dollars, which are only used in fewer than 10 states, according to the National Center for Medical-Legal Partnership.

The role of these sorts of medical-legal partnerships has grown over the past year as millions of people in the U.S. have faced lost income and the threat of losing their homes during the COVID-19 pandemic. Some partnerships have helped patients secure unemployment checks, while others have fought some of the evictions that weren’t already barred by state or federal moratoriums.

“All the issues that people are struggling with in the pandemic are the same issues that medical-legal partnerships have been trying to work with forever,” says Vicki Girard, a law professor and co-director of the Georgetown University Health Justice Alliance in Washington, D.C.

In Montana, Kallie Dale-Ramos helped persuade a primary care association, the state’s legal aid organization and six community health centers operating in cities across Montana to pool $20,000 to help hire an attorney, who can split time among the clinics to help patients affected by the pandemic.

Since the start of 2020, that investment has helped more than 130 patients seek unemployment claims — and potentially stave off financial ruin.

One woman had been waiting for unemployment assistance since applying in March 2020, and only recently received her first check, says Dale-Ramos. Without legal help along the way, the woman “would have just been like, ‘I can’t do this anymore,’ ” Del-Ramos says.

This sort of legal-medical partnership is centered on the notion that doctors can do only so much to keep their patients healthy.

Advocates for such programs cite the example of a child suffering from asthma caused by mold in a dilapidated apartment. While a doctor couldn’t force a landlord to clean up the property or allow a tenant to break their lease, a letter from a lawyer might be persuasive, says Dr. Tillman Farley, Salud’s chief medical officer.

“Some of these impacts carry out for decades,” Farley says. “And once you get into effects like that, then you’re really talking generational changes in health outcomes.”

Beyond common sense, evidence from emerging research suggests the approach can work. Patients at Veterans Affairs clinics in Connecticut and New York, for example, saw their mental health improve significantly within three months of consulting a clinic attorney, according to a 2017 study in Health Affairs.

And at Colorado’s partnership, a survey of patients from 2015 to 2020 found statistically significant drops in stress and poor physical health, as well as fewer missed medical appointments among its 69 respondents, says Dr. Angela Sauaia, a professor at the Colorado School of Public Health who led the research.

The possible reasons for missing fewer doctor appointments after getting the legal help, Sauaia says, included patients having more income, being less depressed and having an improved immigration status that made them less fearful to venture into public.

The biggest challenge for these programs is securing stable funding. Many are funded with a small amount of seed money, or by grants that run only a year or two.

Medicaid, established in 1965, is a nationwide health care program for people who have low incomes or are disabled. It’s jointly funded by the federal government and each state, and traditionally has covered medical costs such as physician visits and hospital stays.

In recent years, though, some states have increasingly sought to use Medicaid dollars to fund initiatives such as using social workers or offering legal assistance to address the social determinants of health. That includes North Carolina, which is using a federal waiver and hundreds of millions of dollars in a highly scrutinized effort to transform its Medicaid program. Among its strategies is more legal aid for patients.

The nationwide shift has prompted some health policy experts to question whether Medicaid is beginning to run too far afield of its purpose.

“Everybody agrees that social factors play a very large role in health outcomes; the question is what to do about it,” says James Capretta, a resident fellow of the American Enterprise Institute who was an associate director of the Office of Management and Budget during the George W. Bush administration.

“Medicaid is already an immense program with lots of financial challenges,” Capretta notes. “The program was not built for Medicaid to pay for too many services beyond the more direct services that are related to a medical condition or a disability.”

The small-scale use of waivers and supplemental Medicaid dollars to fund programs aimed at the social factors of poor health — such as housing for people with severe mental illness — works in some places, says Matt Salo, executive director of the National Association of Medicaid Directors. But for Medicaid to provide widespread funding for such social service programs would be unsustainable, and shouldn’t happen, he says.

“It is not — and should not be — Medicaid’s responsibility to figure out how to pay for it,” he says.

Some advocates for legal assistance programs and health policy experts worry about a potential backlash based on misperceptions about how the little-known medical-legal partnerships use Medicaid. For one, the programs generally aren’t reimbursed for services in the same way traditional Medicaid programs are, notes Sara Rosenbaum, a health law and policy professor at George Washington University.

A 2019 Manatt Health Strategies report on funding for medical-legal partnerships said “the time is ripe” for these partnerships to explore the little-used avenues available in Medicaid.

The states that administer the Medicaid programs and the managed care organizations that contract with them have some discretion to fund non-clinical services that improve access or outcomes for social determinants of health, according to the report.

States also can write the medical-leaderships programs into a larger federal waiver application for experimental, pilot or demonstration projects that promote Medicaid’s objectives.

“The dollars are minimal,” says Ellen Lawton, former director of the National Center for Medical-Legal Partnership, and a senior fellow at HealthBegins, a consulting firm. “And I think what we’re seeing is that — appropriately — the Medicaid programs are pacing themselves. They’re looking to see what works — what works in our state, what works in our region, what works with the populations that we’re focused on.”

States have been creative in funding these sorts of legal assistance programs. Colorado officials say they amended their Medicaid spending plan to provide grants to two such partnerships. Other states have sought federal waivers allowing them to support those programs. The Department of Veterans Affairs also has funded medical-legal partnerships at clinics.

Scanlon, the attorney at the Salud clinic, is part of a nonprofit organization called Medical Legal Partnership Colorado that operates under a joint agreement with the clinic. Colorado’s Medicaid program approved a $300,000 grant to the partnership that was renewed this year to pay for three attorneys’ salaries.

Authorizing the funding took little convincing, says Michelle Miller, chief nursing officer for the state’s Medicaid program. “When we were asked to approve funding for this, I jumped at it,” Miller says.

For Cynthia Enriquez De Santiago, the 19-year-old patient from Salud’s Commerce City clinic, legal advice made all the difference to her medical care.

In addition to her cerebral palsy, the teen is blind and has difficult speaking; she needs round-the-clock care, including help eating and using the bathroom. Her doctor at the clinic put Rafaela De Santiago, Cynthia’s mother, in touch with an attorney who could help her continue to be her daughter’s legal guardian after the teen turned 18 last year.

The timing of that legal help proved critical: Several months after seeing the attorney, Cynthia was rushed to a hospital. For no obvious reason, she’d became hypothermic; her blood pressure dropped and her blood-oxygen levels cratered.

“The doctors were telling me I had to be ready for the worst,” says the teen’s mother through an Spanish-to-English interpreter.

Because she was Cynthia’s legal guardian, her mother was able to sign off on follow-up tests after that emergency to quickly get to the root of the medical problem and help prevent it from happening again.

Without guardianship, “it would have been really, really hard, because I wouldn’t know where to begin the process,” Rafaela De Santiago says. 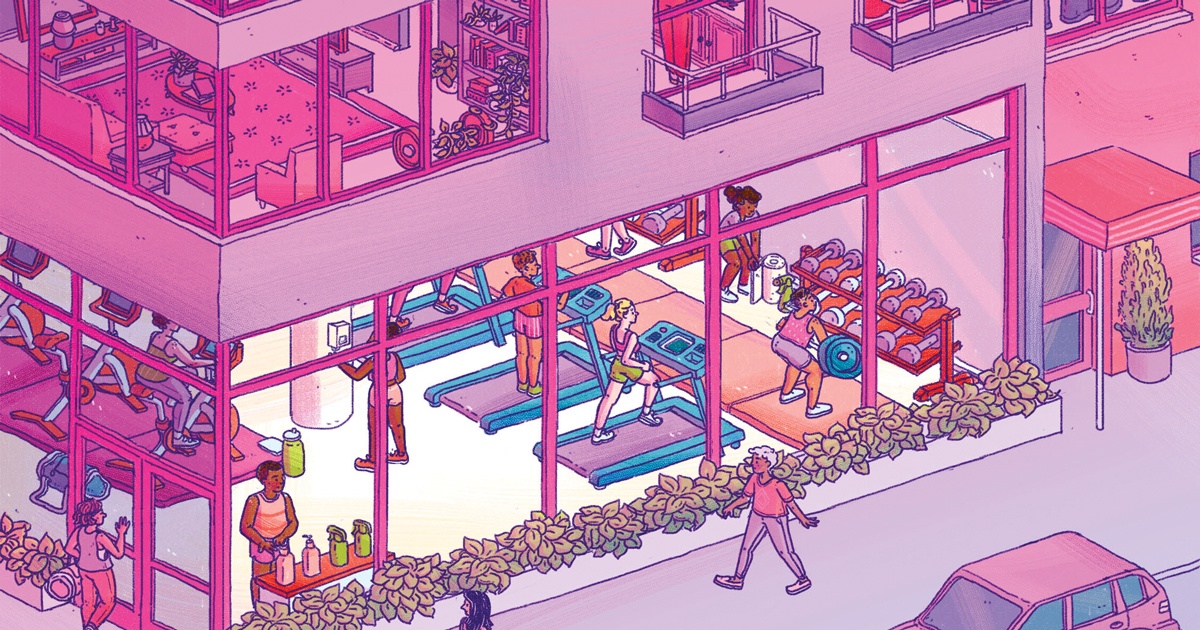